One year after Pakistan floods

One year ago during the month of July/August, the floodwaters that ravaged southern parts of Pakistan have long receded. Though gone are the makeshift tent camps on roadsides but revival of normal life and livelihood still remain a challenge. Thousands continue a daily struggle to support their families and re-establish livelihoods.  As a new monsoon season is on full swing, last year’s trauma and economic pain still linger.  While last year’s victims struggle to recover, others now worry that changing world weather patterns will cause renewed flooding.

The devastation caused by the 2010 floods was worst in Pakistan’s history; almost 2,000 deaths, nearly 20 million displaced or affected and one-fifth of the country went under water. The deluge inflicted unprecedented catastrophic damage on a country already reeling from the effects of US-led war on terrorism. A year later, the picture is dismal. 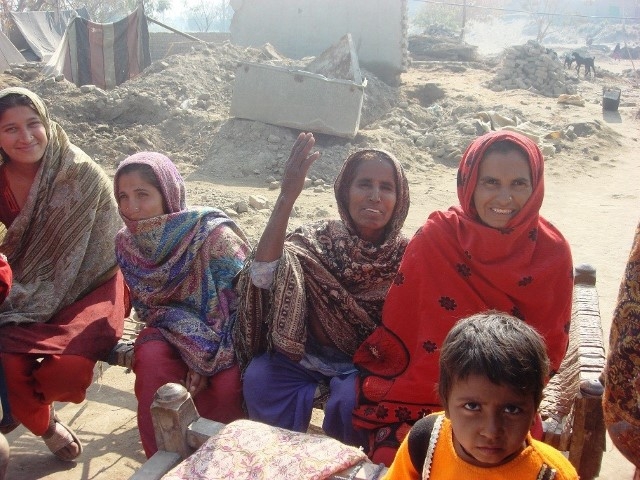 Pakistan stretched thin amid deadly violence, floodingGet the latest world newsAlthough many flood refugees have returned homes but little is known to the world about their miserable conditions and stories of struggle, to combat the horrific effects on lives and livelihoods. Particularly the women who are the worst-hit still facing multiple challenges after one year. Their work burden is multiplied. While husbands and male members in poor families, being daily wagers, are struggling to find sources of livelihood, women remain busy in rebuilding their damaged shelters and dwellings. In small villages and hamlets, one can find these women doing brick work and plastering their mud and half cemented houses.  The brave ones who have done the reconstruction work are out in the fields to assist their tilling husbands. Rest or respite seems rare thing to them.

Their lost possessions have been replaced at higher costs or not at all. Many marriageable girls who lost their dowry and valuables are making fresh start to make it again to get marry.  To address the issue a new culture of collective marriages is gaining ground, which was earlier unknown to these areas. Unfortunately, the phenomenon is giving rise to another social trend of early girl marriages. Though the custom of girls’ early marriages is already present in Pakistan however, the post flood conditions have given new impetus to this trend. It must be stopped and the only way to tackle it is to initiate women focused anti-poverty programs in the area. For instance, any scheme to allocate state land and distribution of livestock among poor women in area will be helpful in addressing the issue. 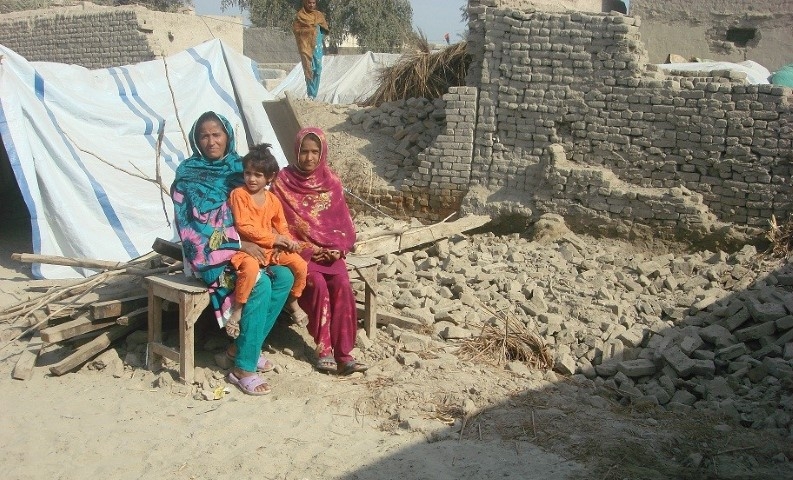 Another particular problem is women health, which is generally ignored. Although during flood, pregnant women had opportunity to avail facilities of ante-natal and post natal care, provided through emergency medical camps, but the moment relief phase was over, these women were left in conditions, much vulnerable to reproductive-related diseases. Moreover, women and children are also facing nutritional problems on account of non-availability of proper healthy diet. Those who lost their livestock are in fact deprived of milk and permanent source of livelihood. 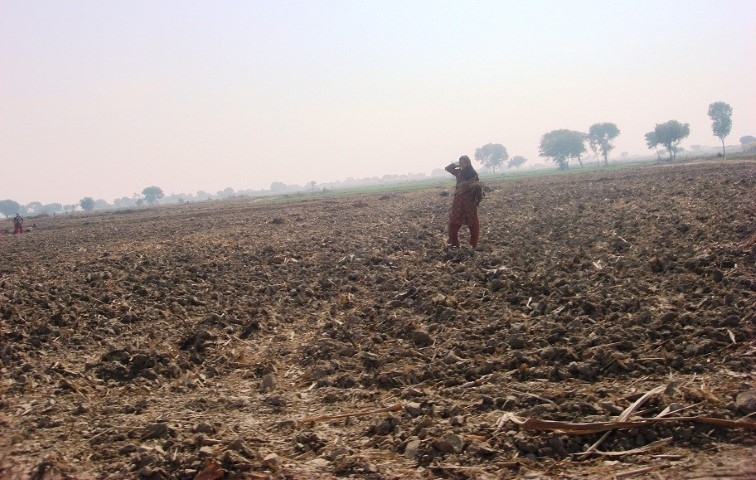 The compensation money from the government has been unevenly distributed. Widows and female-headed families faced discrimination in distribution of Watan cards (relief money) and rehabilitation programs. Despite tall claims the Government has failed to decrease the rising vulnerability level of poverty among women after one year.  While donors promises of some $600 million in aid have not arrived. As a result squeezing livelihood options coupled with price hike are impacting the poor families and women in worst manner.

Last month when I revisited Dera Shahwala, a small village of district Muzaffargarh, one of the worst-hit areas in southern Punjab, things were not much changed since my first visit soon after floods. Though work on roads, embankments and water courses/channels is evident, but the issues of provision and restoration of livelihood resources are yet to be resolved.  One of the main sources of livelihood for poor landless women in this area is cotton picking. With loss of the crop they could not find the alternative. In some cases where land is permanently overtaken by the rough sand there will be no crop at all, making peasants resource less on one-hand and depriving women cotton pickers of their livelihood on the other hand.

A flood affectee, here, Myriam Bibi recalled that flood water washed away everything in the house and she lost most of what was inside and now lives in a newly erected small room while his children were sent away to stay with relatives. She is rebuilding her house brick by brick with the help of her husband who contributed his free time after day’s labor. The work is progressing slowly, and for the most part the house remains a roofless ruin. “Relatives and friends help us, but not everyone is so lucky. It is very difficult to rebuild our life,” she said. “I don’t see in the coming two/three years that I will have my house completely rebuilt.” 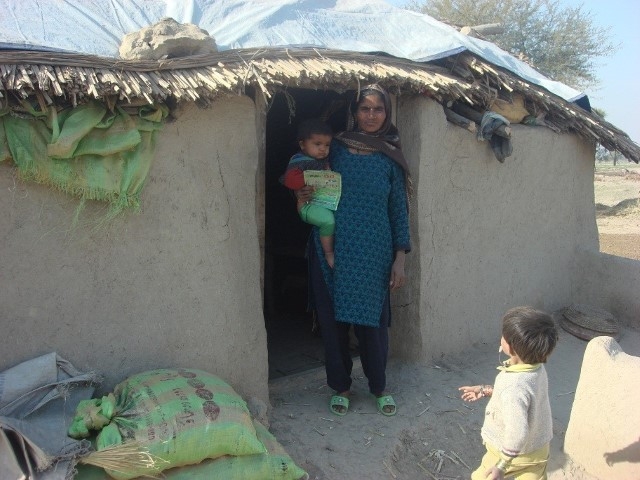 Aysha Bibi, a young mother of five and wife of a farm worker, said floods, however ‘natural’,  were profoundly discriminatory, when where they hit, they impact different people with different degree of misery. Some people were more affected than others.  We lost our dwelling and the only cow; now we cannot purchase te new one. I cannot provide milk to my children.  Whatever money we had, is spent on reconstruction of our home. 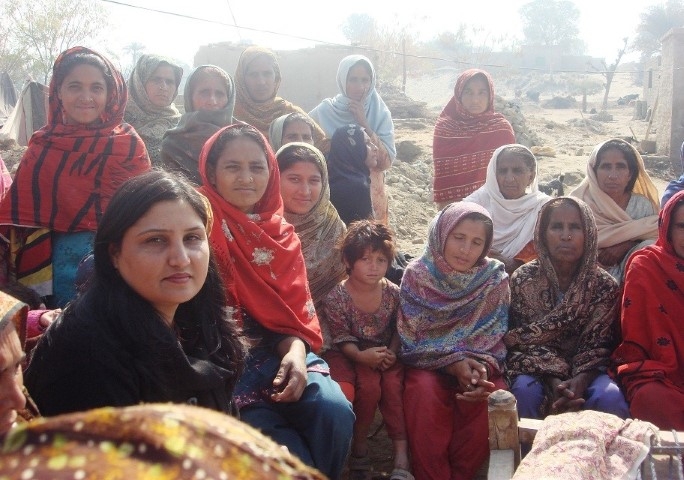 Another resident, Zohra Begum said her 7-member family moved in the immediate aftermath. “We have a small piece of land where me and my 16-year daughter have to work longer hours to assist my tilling husband. We owe debt to our relatives and we have to repay it. My two children who used to go school are now supposed to be at home to look after the siblings.  When we first got here there were facilities for us. But they have since been taken away. Now people just come and talk and talk but they do not give us any help.

False rumors of massive floods are also leaving residents on edge. People have sleepless nights in some areas near Indus. “It is a mental torture when we are hearing that there might be another monsoon flood,” said 36-year-old Parveen, who is still struggling to rebuild her damaged home.